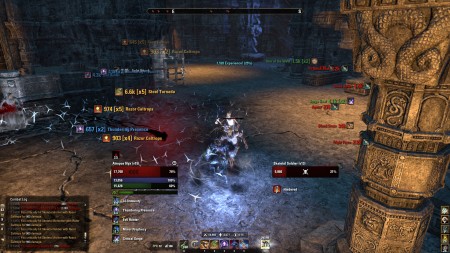 Hey folks, I have released an official ESO 2.1 (Imperial City) update for Foundry Tactical Combat. This update primarily serves to add compatibility with the new API version and re-factor the way that buff tracking is handled by FTC. As many of you know the recent ESO update dramatically changed the nature of buff and effect-related information reported by the API.

Previously FTC was forced to use a very complex logic to approximate the activation and timing of buffs and debuffs. Thankfully ZeniMax has relaxed their stance on the API and has restored this information to the official UI layer. A consequence of this was that a very large amount of FTC code was no longer required, and in cases, undesirable. I needed to spend some time going carefully through the logic for buff tracking and deciding how to adapt to the new system. Sorry that this update is a bit delayed after the launch of 2.1, I appreciate your patience and support!

Welcome to Tamriel Foundry, your home for discussion, guides, and tools to optimize your Elder Scrolls Online experience.

Your can read more here about how we use donations on the About Us page and learn what rewards donations will unlock for your Foundry Network account.